“By Farmers, For Farmers”

Entering its seventh year, The Groundswell event provides a forum for farmers and anyone interested in food production or the environment to learn about the theory and practical applications of Conservation Agriculture or regenerative systems, including no-till, cover crops and re-introducing livestock into the arable rotation, with a view to improving soil health.

Groundswell is a practical show aimed at anyone who wants to understand the farmer’s core asset, the soil, and make better informed decisions. It is a two-day event featuring talks, forums and discussions from leading international soil health experts, experienced arable and livestock farmers, agricultural policy experts, direct-drill demonstrations and AgTech innovators.

With wide appeal across the food and farming spectrum, Groundswell is relevant for conventional, organic, livestock, arable, landowners or tenant farmers.

Groundswell was founded by the Cherry family on their mixed farm in Hertfordshire. John and Paul Cherry have farmed for thirty one years, converting to a no-till system in 2010.

“We started Groundswell out of a sense of frustration that no-one was putting on a Summer Show to which we might want to go. Having gone down the no-till route, we realised that we only really needed a good seed drill and not a barn full of expensive cultivating equipment, so Cereals and all those Tillage events were a waste of our time. None of the lectures and very few of the exhibitors talked about the soil, let alone soil biology.

A visit to the fabulous No-Till on the Plains Conference in Salina, Kansas showed us what could be done. One of the most striking things was how hungry for information  the farmer delegates were about the soil and the ecosystems that lived in them. Also, a lot of the speakers were describing some fairly radical farming ideas and techniques and their audiences were lapping it up. We thought that if the good people of Kansas were ready for this, we sure as hell ought to be ready in Europe.

And so Groundswell began five years ago and is growing, and it is going from strength to strength. In 2021 we welcomed over 3,500 delegates. This growth reflects the snowballing of interest in Regenerative Agriculture, not only from farmers but also from policy makers attracted by the ‘public benefits’ of such systems such as carbon sequestration and flood/drought prevention. And then there are the Foodies who come to find new and better ways to join the conversation about how and what we might grow in the future; they don’t need to be told that food tastes better when it grows in healthy soil.

Despite these other interest groups, Groundswell remains a show ‘for farmers, by farmers’; we aim to explore ways of working with nature to grow food in a profitable way. As the new saying goes: ‘Resilience is Fertile’ and after all profitability is one of the key factors that makes your operation resilient. It’s all very well regenerating your soil, but if you are not making money while you do it, you won’t be doing it for long.

We are particularily grateful to Affinity Water who have pledged their support by being headline sponsors for the event, it is so pleasing that they recognise all the benefits that good farming brings to the water cycle. 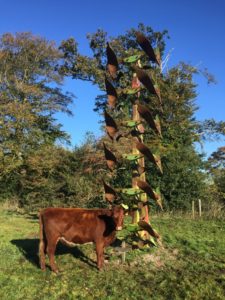 Tickets are released in May 2023