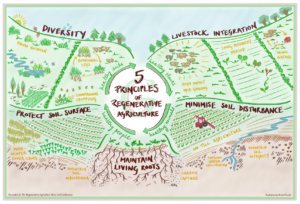 Healthy soils can be compared to coral reefs in terms of their biodiversity, one handful of soil will contain more living creatures than there are people on the planet, comprising thousands of species of bacteria, fungi, nematodes, protozoa, arthropods, insects and earthworms. The main source of energy that drives this dynamic ecosystem comes indirectly from the sun and rain, in the form of sugars that plants exude through their roots. It seems surprising that plants, having made sugars from CO2 and water via photosynthesis, then exude as much as 60% of them straight into the soil. But it is very much in their interest, as this symbiotic relationship, primarily with mycorrhizal fungi and bacteria, will feed the plants with nutrients and water that would otherwise be unavailable to them. At the same time, this priming of the bottom rung of the soil food web helps feed the entire system.

Regenerative agriculture systems recognise the importance of healthy soil for growing healthy crops and forages with minimal inputs, as well as the broader landscape functions of a healthy water cycle. The three tenets of Conservation Agriculture (CA) are borrowed from nature, under whose benign tutelage soils were created in the first place:

1) Minimal disturbance of the soil. Any form of tillage, i.e. ploughing or cultivating, immediately breaks up the physical structure of the soil, as well as introducing oxygen which stimulates bacteria to break up the soil organic matter which binds soil aggregates together. This results in a rush of freely available nitrates, but there are no plants to use it (due to the cultivation) so it is likely to be lost in the next rainstorm, along with newly released sand, silt and clay particles (as erosion), which are no longer bound in aggregates.

2) Keeping soil covered. Ideally we want living plants in the ground all the time, as the above-ground part will protect the soil from raindrop impact, which helps slow erosion and helps water infiltration, whilst the roots hold the soil physically together as well as feeding the microbes. If it isn’t possible to have living plants covering the soil, then a mulch of straw will protect it from sun and rain and vastly improve water infiltration. Bare soil is bad, it needs armour.

3) Building diversity. The ideal is to grow a diverse mix of plants all at once, as each will occupy a slightly different ecological niche and thrive in a way with complements other plants and the soil, by fixing nitrogen or storing nutrients for later release, or growing at different seasons, or occupying a different space above and below ground…whatever, multispecie cover crops (i.e. crops grown for soil health or grazing rather than cash) will always provide much more biomass than mono-specie crops. For reasons of harvesting ease, most combinable crops are grown as monocultures, but then a diverse rotation is vital, with a variety of plant types, broadleaves and legumes as well as cereals.

There are two more principles, which together with the three above, form the five principles of soil health. An awful lot of the farmers who set off on the CA journey become slightly obsessed with their soil and so I’ll include these as 4 and 5:

4) Keeping living roots in the soil. As noted above, living roots impart so much goodness to the soil. Seeding cover crops as soon as (or even before) the previous crop is harvested ensures optimal photosynthesis which helps suck CO2 from the air and turn it into stable carbon in the soil, which supports the whole soil food web, as well as moderating the water and nutrient cycles.

5) Re-introducing livestock back onto the land. This is another form of diversity and another direct copy from nature. Grazing animals make it much easier to grow diverse covers and leys which add fertility and control arable weeds, as well as creating another income stream. Cattle get unfairly accused of being a major cause of greenhouse  gases, when in fact they are the best hope we have, when used properly, of reversing climate change, or at least bringing atmosheric CO2 levels down. This requires well managed grazing, ideally holistically managed grazing. This technique has been used to restore millions of acres worldwide. Practitioners report springs arising as the water cycle starts to work properly again and other tales of wonder. The vast majority of grazing land in this country is degraded due to poor management and is unable to absorb rainwater half as well as it should do.

I ought to add that another key part of the first principle, from the soil health point of view, is the need to minimise chemical disturbance of the soil. Most conventional broadacre cereal farmers are finding they have to apply more and more fertilisers, insecticides, herbicides and fungicides every year to get the same yields as last year because as the soil degrades, the farmer has to attempt to do the job that microbes will do for free.  Inevitably the artificial fertilisers don’t work as well, so the crops get attacked by diseases which require fungicide application etc etc.

All these salts and biocides harm the soil creatures in some way or form. And result in residues in the water. A lot of no-tillers are using fewer and fewer chemicals every year and getting the same yields. For instance, on this farm, we no longer use insecticides. We don’t need them and now we have so many ground beetles that we don’t have slug problems either, so don’t need to use metaldehyde, nor any other slug pellet.

The closer we can get to a natural system, the cheaper our costs will be and the healthier our soil. And the better the water cycle. And the better quality food we’ll produce, but that’s another story for another day…