This article reworks and paraphrases two presentations given at Groundswell 2021, “What lies beneath” perspectives on the underworld”, and “The belowground powerplant: how the biological engine of the earth underpins soil health”. By Karl Ritz, Emeritus Professor of Soil Ecology, University of Nottingham email: ritz.soil.ecol@gmail.com 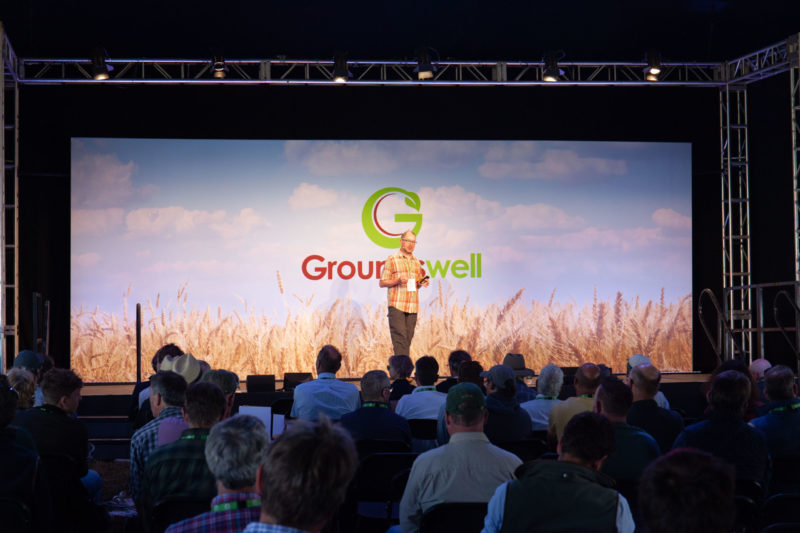 Regenerative agriculture wisely puts soil health at the heart of its concepts and practices. These are nicely summarised by the Groundswell ‘5 Principles of Regenerative Agriculture’ illustration. Here are some mechanistic reasons why these tenets make sense, and particularly in relation to the biology of the soil system.

For field-based growers soils represent a primary business asset. But the importance of healthy soil goes far beyond the farm gate. Human societies have always been highly dependent upon healthy soils. This is because the earth beneath our feet underpins the environment we live in at local, national and ultimately global scales. Soils provide a platform to live upon and are fundamental to the provision of the majority of our food. They support all terrestrial habitats, store and filter water, cycle carbon and nutrients, are intimately involved in climate regulation, and even tell us about our past via the archaeology they hold. As such, soils need appropriate and sympathetic management to ensure they function in an effective and persistent manner to meet as many of these demands as possible.

Soils are also remarkable systems. They are extremely complex both in terms of the variety of their constituents and the way these are arranged in space, from scales of millionths of a metre to kilometres. Soils are dynamic and reactive entities teeming with a huge variety of life, supporting levels of biodiversity that almost defy imagination. The amount of living material belowground always matches or exceeds that aboveground, and there are typically tens of thousands of microbial species and many hundreds of other tiny organisms in a handful of soil from almost anywhere. These communities can be thought of as the ‘biological engine of the earth’, working to drive and regulate the majority of the key processes and functions which soils deliver.

But there’s more to work than life – soils function by virtue of the way they are put together and the interactions that occur between the myriad of physical, chemical and biological components within. These all occur in the astonishingly complex labyrinths of pore networks present to a greater or lesser extent in all soils. Soil structure is profoundly important since it provides the support matrix for plant roots, is the habitat of all soil biota, regulates how water and air are held in the fabric of the soil, and governs how gases, liquids, solutes, particles and organisms move through the belowground matrix. 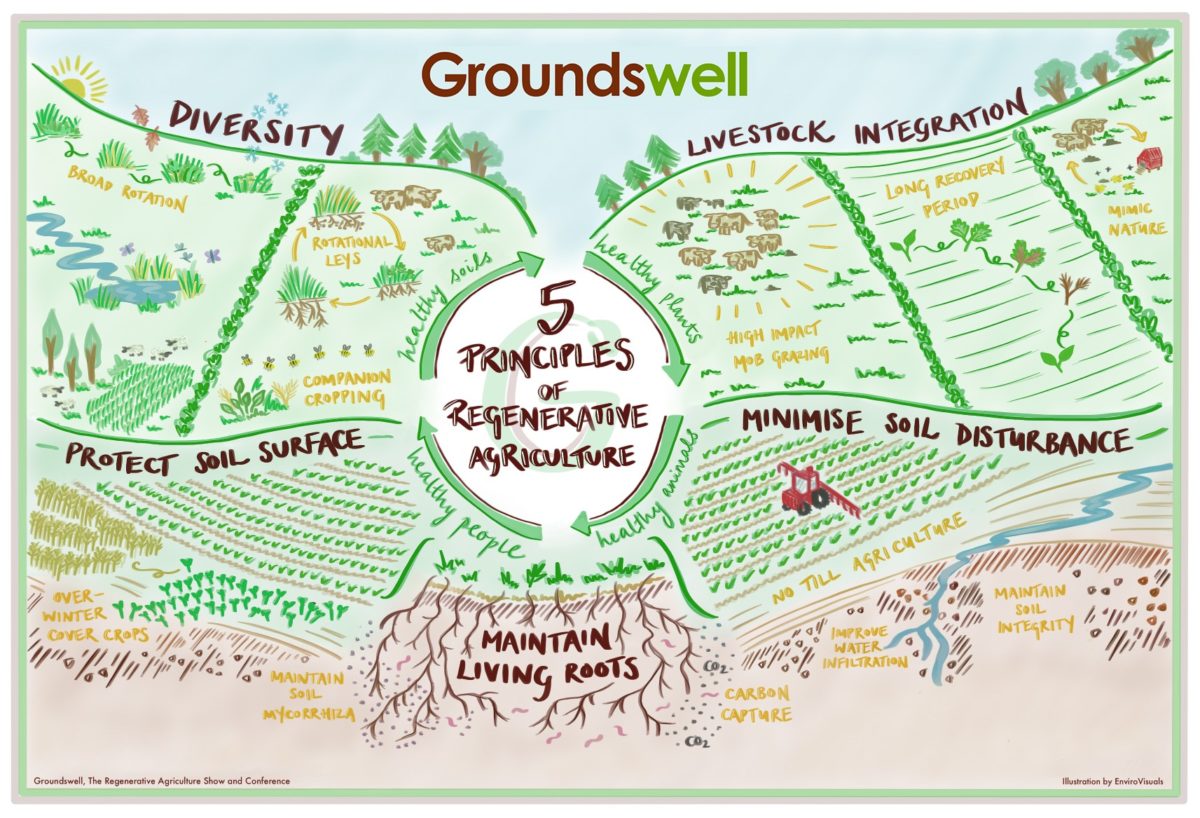 The Groundswell 5 Principles of Regenerative Agriculture

More diverse systems have inherently greater capacity to carry out a broad range of functions, and for soils this range is enormous, as mentioned above. Diversity in systems also imparts resilience, since there is more opportunity for adaptation to changing circumstances (e.g. abnormal weather, pest/pathogen loads). Cropping strategies based on broad rotations, rotational leys and companion cropping will generally engender belowground biodiversity, since more variety in the form of plant material entering the system material sustains more variation in the belowground communities which consume it. These strategies combined with those that minimise soil disturbance (see below) also tend to increase the diversity of soil pore networks in terms of the range of pore sizes and their inherent shape and connectedness. This in turn increases biodiversity by providing more complex habitats, and also improves water retention and transmission to plants.

The soil surface is where the underground meets the overground, and is a crucial zone in terms of regulating how water enters the fabric of the soil and gases exchange between the soil pore networks and the atmosphere. Structural degeneration of the soil surface impairs these processes and also can lead to proneness to erosion and inhospitable seedbeds. Maintaining plant or residue cover on the surface provides physical protection from rainfall and trampling, but also feeds the soil biota which in turn improve soil structure by several mechanisms. These include restructuring by passage through animal guts, adhesion of soil particles by microbial glues, binding by fungal hyphae and coating with water-resistant compounds. These actions lead to a more diverse pore system, including more pores which connect the surface to the fabric and hence allow effective infiltration and gas exchange. Over-winter cover crops (and judicious maincrop/cover-crop management) are then a  sound strategy to achieve an inherently healthy soil surface.

Plants have an absolutely key role in soil functioning, since they provide the energy which  fuels the biological engine. This energy is derived from sunlight, transformed by plants into chemically-bound energy which can then be utilised by other organisms. So long as a soil has plants actively growing in it, carbon and associated energy will be delivered belowground, with all the associated benefits. In the absence of plants, the soil biota continues to metabolise soil organic matter and releases carbon (as carbon dioxide, CO2) via respiration, which passes to the atmosphere. From the perspective of the soil biota, ‘carbon capture’ is then really all about ‘energy capture’.

Mycorrhizae are particular types of fungi which connect to plant roots and effectively extend  the volume of soil which is explored by the plant:fungus system. Since fungal hyphae are orders-of-magnitude smaller than roots, they can cover much greater spatial extents than their host roots, and are able to grow into smaller soil pores that are otherwise inaccessible to the plant. This enables mycorrhizae to acquire nutrients – especially phosphorus – and pass them to the plant at rates far more rapidly than can occur via diffusion through the soil. Mycorrhizae can also connect the root systems of different plants together and enable signalling between the plants to occur. This can allow rapid transmission of stress messages from a plant that is being attacked by pests which signals other plants to start synthesising protective compounds. Mycorrhizal hyphal networks play a part in maintaining soil structure via binding and coating mechanisms. Maintain mycorrhiza by ensuring the presence of host plants in the soil (maintain living roots!), and minimising disruption of their delicate hyphal networks via tillage.

Soils function by virtue of their spatial organisation and especially the integrity of this arrangement. The detailed reasons for this are complicated, but essentially it’s about the connectivity of the system. This is readily appreciated in the context of improving water infiltration, for which pores at the soil surface need to be connected to the soil fabric (see above). Going beyond this, it includes the connectivity of entire soil pore networks, which underpin the appropriate movement of gases, water and nutrients between both organisms and plant roots, but balanced by a constraint of such processes. Pore connectivity also regulates the movement of organisms themselves and interactions between them. Fungal networks need to coherent and connected to function well. There are also factors associated with physical protection of organic matter. Disturbed soils tend to become disconnected in physical and biological terms and hence function less efficiently. No-till agriculture is then a principal means to achieve minimal soil disturbance and maintain soil integrity.

In one sense, it could be argued that managing the soil biota is a form of ‘micro-livestock’ integration! However, mega-scale animals represent both an opportunity and challenge for soil management. Grazing animals modify carbon and nutrient cycling substantially via a myriad of interactions with the soil biological engine. Manures can provide an effective combined fertiliser and soil conditioner by virtue of the nutrients and organic matter within them. Animals tend to disturb soil systems, so allowing long recovery periods melds with the tenet of minimising soil disturbance. The effects of mob grazing on soil biological systems are poorly understood, but since they involved relatively short-term disturbance and in principle soil surfaces are protected by a dense sward, recovery from perturbation may be rapid. The concept of mimicking nature directly connects to the principle of harnessing mechanisms manifest in biological systems which have evolved over aeons in the context of terrestrial ecosystems and absence of industrial intervention. These systems are inherently diverse, connected and ultimately governed by solar-derived energy flows. Hence the sense of the 5 Groundswell Principles.

Karl’s talk “What lies beneath” from Groundswell can be watched on the Groundswell YouTube channel: www.youtube.com/c/GroundswellAgriculture