Farming on Crutches at Groundswell 2022

Thanks to Groundswell, in March a pioneering course was designed and tested by a group of young amputees in Sierra Leone to train their peers to become agro-ecological and regenerative farmers. It was the result of more than ten years of believing in what was possible, of determination and of generosity.   It is the vision of the Sierra Leone Amputee Sports Association (SLASA), which supports amputees through playing football, building confidence, generating friendships and fellowship and now through farming.

A 3-acre site, donated by the then UN Secretary General Ban Ki-moon in 2010, had lain idle until a donation from the Lush Foundation in 2020 allowed the site to be developed as a farm and training centre – which now includes accommodation, a well, solar power and trickle irrigation.  In 2021 Groundswell raised funds for SLASA.  A few weeks ago –   supplemented by funds from the UK pastoral farming community and the Be the Earth Foundation – these funds paid for 16 amputees (11 with a single leg and 5 with a single arm) to come together for a week to work through the design of a training course through which their peers could learn to farm in harmony with nature (and as far as possible without debt) and to overcome their physical constraints.  The course was led by Mambud Samai, who founded SLASA 20 years ago and who in 2018 had spent a year learning about agro-ecological farming at the Asian Rural Institute in Japan.  Following the design course, he wrote: The outcome was incredible. Each participant returned home with seeds, money for tools and food for work at their local farms. Saffa Bockarie; a participant from Kailahun said they are going to form a cooperative; Michael Rogers from Pujehun said they will do agribusiness in Bokashi fertilizer; Mary Kamara, a participant from Freetown, prepared an individual profile for all the amputee farmers present and has formed a What’s App group to keep in touch and to share their farming updates with one another. 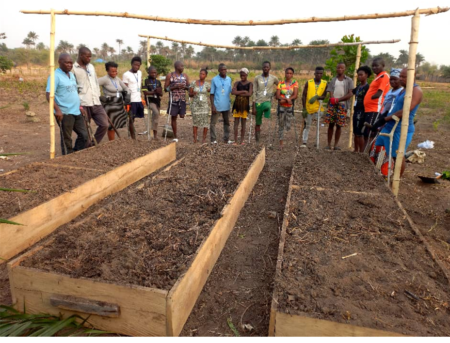 SLASA now wants to offer that course to another 180 amputees across the country.  Once that is done, the course – which addresses how to farm with nature as well as how to farm on crutches – will be offered to 240 schoolchildren and 150 able-bodied farmers who are keen to forgo both the purchased inputs (and the debt) that comes with “conventional” farming.  A pilot community garden is to be set up and evaluated in one of the five regions of the country so that the training can be provided locally.  To make this a reality SLASA is seeking to raise £70,000. 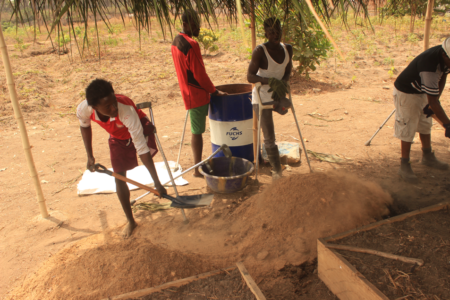 This year Groundswell has kindly offered not only to raise the profile and provide the opportunity for you to support this pioneering initiative but also to double the value of the funds raised. You can get some idea of what it is like to farm on crutches in these still pictures .  However, the reality becomes clear when you see them in action in this short film – doing their morning exercises, making raised beds, making compost, harvesting cassava and discussing the design of the course.  We hope that you will feel encouraged to support these inspiring people by making a donation – for which thanks.

Groundswell is match funding all donations made to Farming on Crutches this year and to date has nearly raised £5,000. You can add a donation with your ticket purchase or separately using the page here.