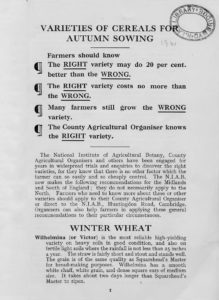 Good performance starts with the right variety
At KWS we believe variety selection doesn’t get the time it deserves. It’s time it did.

In 1931 the National Institute of Agricultural Botany (NIAB) produced a booklet for growers that highlighted the importance of variety selection and its significance to farm performance.
Its direct and to-the-point message could not have been clearer: not all varieties are the same and failure to match variety to the region or farm situation leads to poor performance. In an era where mistakes had severe implications, there was no room for diplomatic language. It was a case of ‘tell it straight’.
Nearly a century later and our choice of words may have become a little more subtle, but the NIAB message is as valid today as it was in the 1930s: good performance begins with making the right decisions from the start.

Much to consider
The subject of variety selection tends not to get the time it deserves because often it is seen as a personal choice and something, we have done since leaving college with little change in our thought process. How often do you hear someone say they are not growing a variety simply because it’s a milling wheat and they grow feed? It’s absurd logic. Farmer meetings devote many hours to issues such as cultivation policy, fungicide strategy and tackling problem weeds. All subjects for which there is no easy and quick or right and wrong answer. Just as with variety choice, the solution is often unique to the farm situation under discussion.
The point about variety choice however, is that it is the first-step towards answering the questions farmers love to ponder, such as cultivation policy, fungicide strategy and tackling problem weeds. Though many may not recognise it: it is one of the biggest decisions they will make in the growing season. Variety choice determines:
• market opportunities and therefore chances of a price premium over feed;
• influences whether to drill early or late;
• decides the order in which crops get sprayed in the spring;
• the order in which varieties mature and therefore are harvested; and
• cost of production.

Variety flexibility
At Groundswell 2019 our plot features three varieties: KWS Kerrin, KWS Siskin and KWS Firefly. Each has been chosen to help illustrate the NIAB point that not all varieties fit all situations.
For example, the bread-maker KWS Siskin has excellent disease resistance and it does offer the opportunity to save on fungicide spend compared with a more management heavy variety, such as KWS Santiago. We know the reliance on variety resistance is becoming more important as fungicide efficacy falls, but it is only part of the solution. We also need consistent yields across regions, soils and seasons to deliver a constant cash-flow. This is what KWS Siskin brings to the party, not a boom-to-bust rollercoaster performance.
KWS Siskin has a highly vigorous growth habit that means it is not suited to early drilling. This speed is desirable where there is a need to spray-off a grassweed flush prior to drilling or sowing has to be delayed until after root crops. It is also useful when sowing occurs after temperatures have dropped (typically mid-October onwards), seedbeds become poorer and establishment is threatened by slugs. Vigorous growth habits exhibited by varieties, such as KWS Siskin move fast to counteract this adversity. Our question to those who drill direct is: how valuable is speed of establishment and early spring growth to you and is something you consider when choosing varieties?
The third string to KWS Siskin’s bow is its market versatility that raises its potential for a price premium over feed. Demand for Group 2 wheats is strong and the protein flexibility – contracts span a range of specifications from 11.5% through to full 13% – means they are often easier to manage and more financially rewarding than Group 1 varieties. This is the basis of what we call ‘Dynamic’ wheat: they have either market quality or agronomic characteristics that either add value or save time or money and having the option to decide which market to aim for – milling or feed –after it is sown is an advantage not to be over looked.

Management considerations
At the other end of the spectrum, we have feed wheat KWS Kerrin. A consistent performer across two contrasting seasons, it was one of the stand-out performers from harvest 2018. Its vigorous-but-not-too-lively growth habit gives it a wide autumn drilling window. If trash management is a consideration, KWS Kerrin is not much taller than Costello at 84cm. Several of the more recent variety introductions have average heights of around the 90cm. Does this factor in your considerations as direct drillers who want minimal surface trash?
Its below average Septoria tritici resistance however, means it needs good agronomy if its yield potential is to be realised. For those in the east who can handle a high-input, high-output variety, Kerrin is the outstanding choice.
It may not give you the mid-season flexibility that Siskin or newcomer KWS Extase do, but its exceptional brown rust resistance (score of 7 out of 9) relieves the workload pressure at the T3 timing. Is having a range of varieties that help spread the seasonal workload important?
KWS Firefly is included in the plots for these reasons. First, its new and is a variety that will restore the appeal of biscuit wheats. Second, it’s the highest yielding quality wheat for the East region; and third, it offers the third best combination of Septoria tritici rating (7.0) with orange wheat blossom midge (OWBM) resistance.
Like KWS Kerrin it is another vigorous, strong tillering type with a wide drilling window, but is slower to reach growth stage 31 than Siskin.
It too may offer the opportunity to save on fungicide spend compared with a high-input variety, but we should be mindful of the role fungicides play in protecting the longevity of these varieties now and for the future.
Market uncertainty will be rife in a post-Brexit era, but there is a strong argument that says growing for a domestic market that is not threatened by competition from foreign wheat is a sensible way to manage business risk. The risk is lower still given Firefly’s yield potential rivals the best of the feed wheats.