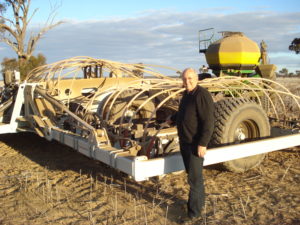 The three ingredients that will save the world from eventual starvation and famine are so important they can’t be seen.

They’re invisible and, because of that, are often overlooked as essential components in nurturing and growing crops.

In an address this week to Groundswell, an agricultural conference in England, international soil scientist, Dr John Baker, pointed to the combined effect of humidity, carbon and soil microbes on successfully growing crops and feeding the world.

Dr Baker explains that humidity is water vapour which can’t be seen unless it condenses as fog, cloud or steam yet is always there and is vital.

Through 40 years of research, he’s discovered that seeds can germinate in 100 percent humidity without requiring liquid water and are capable of sustaining seedlings in the soil before they develop their own roots to absorb water.

In addition the soil’s micro organisms thrive and grow better in a humid atmosphere and are more able to decompose the crop residues and vegetation on top of the ground.

Yet despite the benefits of humidity to successive crops, cultivation (ploughing) continues to destroy the impact it can make to increasing production. “When soil is cultivated, humidity escapes into the atmosphere and seeds never get to utilise it for germination,” Dr Baker says.

“The problem is people can’t see it and therefore don’t appreciate what it’s doing.”

The second silver bullet is the carbon in the soil which is also invisible to the naked eye.

Dr Baker explains that carbon is the food stuff of soil biology and growing plants. Plants absorb carbon from the atmosphere through photosynthesis or from decaying organic matter and it’s imperative it remains in the soil.

Yet carbon is being squandered by cultivation. Every time the soil is disturbed, the CO2 is oxidised and escapes into the atmosphere leading to the serious problem of global warming.

Dr Baker points out there’s more carbon going out than in and the world has reached a stage where the process must be reversed. When it is, there’ll be a much reduced problem with climate change.

“When carbon escapes it not only robs the soil microbes of their foodstuff, but it contributes to greenhouse gases,” he says. “Low disturbance no-tillage is the only mechanism that facilitates the recapture of carbon out of the atmosphere and puts it back in the soil where it belongs.”

Soil microbes, the third ingredient, are so small they can’t be seen. There are six billion microbes in a cup full of healthy, undisturbed soil. That’s more than the total population of the whole world. Dr Baker says their function is to kill plant diseases, enrich the soil, gather nutrients on behalf of the plant roots and create soil structure by binding the primary particles of soil into aggregate.

“They are the invisible trio and they work closely together to harness the biology of the soil and make it work for us to provide enough food for the generations to come.”

John Baker’s low disturbance no-tillage drills, manufactured in New Zealand, penetrate through the residue or vegetation on top of the soil to create seed slots beneath it. They sow the seed and fertiliser in separate bands at the same time. The process traps the humidity, preserves the earthworms, micro-organisms and soil life, increases yields and largely prevents carbon from escaping into the atmosphere.

“What we’re doing is swapping the balance so there’s more carbon-in than carbon out. The method addresses climate change and increases the amount of food that the world produces at the same time,” he says.

“The farmers I address throughout the world realises they haven’t been getting good crop yields because of the lack of the three invisible factors, humidity, carbon and soil microbes,” he says. “The ability of farmers to realise and mitigate these three will affect the ability of the world to feed itself by the year, 2050.”

“I wish they’d be visible so people would understand how vital they are to the food chain.”