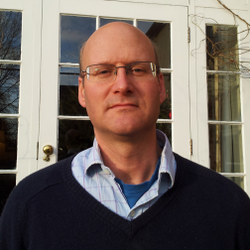 Andrew Bott is a Partner at R H Bott & Son,and Chairman of the Hertfordshire campaign for farmed environment.

Andrew farms 5 miles to the east of Stevenage, farming 270Ha of arable with 60Ha of permanent pasture with a mid-tier countryside stewardship agreement. and also contract farms 200Ha for his brother. The farm has been no till since 2011 growing wheat, beans, winter and spring barley and spring oats and have been growing cover crops since 2007. The farm has been soil mapped and uses variable rate seed maps and variable rate nitrogen applications.