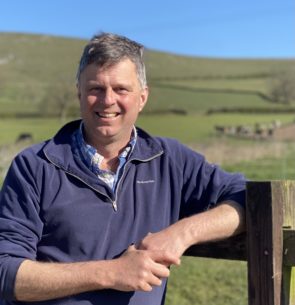 A first-generation farmer, Angus is in a farming partnership with his wife Sue and son and daughter in-law Henry and Rosa. They farm around 750 acres of grassland lying at 500 – 1100 feet at the southern tip of The Peak District. Having followed a very conventional path in dairy farming, the business moved to more of a grazing system in 2008. In 2012, a Once a Day (OAD) herd was established, milking alongside the current herd. 2 years of well costed and recorded information led to the business going fully OAD in 2014. The next step, was moving fully grass fed in 2018. The herd now profitably operates a very simple low input grazing system. Daughter Rosie has also returned home, working entirely on the value-added diversification, Daltons Dairy, which started with making ice cream in 2017. It now also produces milk, butter and cheese with sales largely through the farm’s honesty shop.