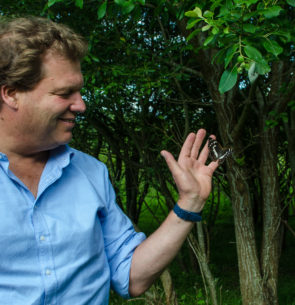 Charlie Burrell studied for a Higher National Diploma in Agriculture and Advanced Farm Management at Cirencester Royal Agricultural College, fully expecting to be a farmer. He inherited Knepp Castle Estate in West Sussex from his grandparents in 1983. Despite intensifying the Estate’s arable and dairy business for seventeen years, farming on the heavy Sussex clay remained unprofitable. All 3,500 acres of the Knepp Estate are now devoted to a process-led rewilding project involving free-roaming herds of cattle, horses, pigs and deer as drivers of habitat creation. Charlie is married to the writer Isabella Tree who tells their story in ‘Wilding – the return to nature of a British farm’. In 2015, Knepp Wildland received a People Environment Achievement (PEA) award for Nature and, in 2017, the Anders Wall award for special contribution to the rural environment within the European Union. Knepp was singled out for mention in the Government’s 25 Year Environment Plan as an outstanding example of landscape restoration. Charlie is on the board of Rewilding Britain, Ingleby Farms and the Endangered Landscapes Programme, and is Chair of Foundation Conservation Carpathia.