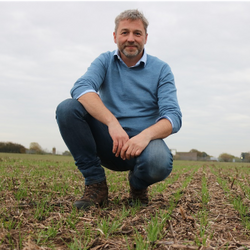 Clive was awarded FCCT’s first ever Soil Farmer of the Year in 2016, is a 2019 Oxford Farming Conference Emerging Leader and now regularly speaks internationally to groups interested in his innovative approach to his farming business and the environment.

Farming combinable crops at scale, Clive managed the transition to a zero tillage system in 2010 with the aim of reducing costs whilst improving yields. Massive reduction in labour, fuel and capital requirements have resulted in the creation of an arable business far more sustainable both financially and environmentally whilst providing opportunity for expansion of his contract farming business. His farming system places focus on increasing soil organic matter levels and biological health, water infiltration and capturing sunlight through cover cropping, rotational diversity and even reintroduction of livestock whilst proving that profitable food production with positive and regenerative impact on the environment is possible.