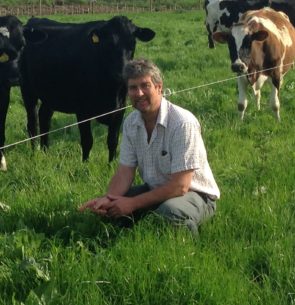 I have been farming for over 40 years and rotational grazing for more than 20 years. I was winner of regional Best Grass Manager of the South West in the year 2000 farm Managing two 500 cow herds of Jersey crossbred spring block calving dairy cows with high rates of grass utilisation, high quality milk and improved profit margins. I have “mud on my boots” and have converted many farms from traditional practices to rotational paddock grazing to ensure the farms are financially viable. Experienced in all species cows, sheep, pigs, horses, and poultry, including parlour design and cattle handling facilities.

In 2015 I went on the Irish Positive Farmers tour of New Zealand to investigate the country’s most profitable grass based dairy farmers, learning much about involving young people in simple but highly effective systems. Subsequent dry summers led me to sow Herbal leys on farms leading to increased biodiversity above and below the soil surface, making improvements in soil health and increasing soil organic matter. By lengthening rotations, herbal leys and diverse swards can fill the summer gap with grazable nutritious forage with minimal inputs.

As an independent consultant I now advise farmers on how to increase biodiversity, sustainability, and profit margins starting with the soil and working upwards. I have helped build a regenerative farming certification scheme for farmers to gain a marque in reward for their efforts in improving soil health among other achievements.

I am a keen birdwatcher, environmentalist, and occasional mountain biker based in the South of England. I gained a National Diploma in Ag from Sparsholt College and later contributed to the Farmers Weekly for 10 years. I am also a Regional Farmer Facilitator of the PFLA and a BGS 2021 Grass Mentor. It is a pleasure to be included in the Groundswell team and look forward to a positive and productive future for all.