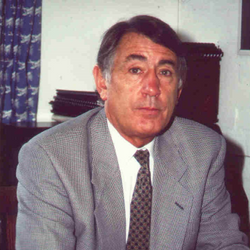 Chairman and co-founder of Trantor International Ltd., where designing and developing new kinds of transport tractors and, more recently, Zero-Tillage tractors for Conservation Agriculture (CA). The innovative Trantor tractors aim to achieve minimum soil-compaction, energy-efficiency, lower fuel-consumption and a much higher productivity on the world’s farms. The innovative farm tractors are designed for a much changed farming market, where the importance of soil-health means a complete re-design change, away from the conventional ploughing (plowing) system in to the Zero-Tillage (CA) farming system.

Graham’s publications relate to Innovation in the Farm Tractor world, where Eco-design, lowering fuel costs in farming & increasing productive efficiency, are the main objectives, that support the new soil-health issues that, in 2017, are growing in many countries. Progress towards Zero-tillage is usually more acceptable to farmers working on arid soils, which is about 65% of the world’s arable land.  The farming world is certainly moving away from ploughing in to the Conservation Agriculture (CA) farming system of Zero-illage as (http://factsreports.revues.org/3966) demonstrates.

The worldwide Ag-Tech industry is undergoing a great deal of change because of soil-health and, in 2016, the USA created the Soil-Health Institute. In 2005, the Trantor International Ltd. (TIL) company of UK, learnt from FAO and began to understand the changes, to farming that Conservation Agriculture (CA), & the No-Till farming system, would bring to Agricultural Machinery. Our company’s approach was to design different farm tractors for transportation and Zero-Tillage. The fundamental understanding of what the UN’s FAO was teaching to farmers was illuminating. The way FAO, FEBRAPDP in Brazil, the No-Till newsletter in USA and others, such as ECAF & the No-Till farmers clubs, have changed their approach, from the ploughing system to Zero-Tillage has been very impressive indeed.

These changes challenge the perceived wisdom of most farmers but the emergence of a much-improved farming system (CA), radically and fundamentally changes the engineering design of both tractors and some agricultural Implements, that are required to work in the top-soil only!!

The work of designing new and more efficient farm tractors for the world market has to consider the 3 main tractor markets worldwide – Arable farms, Livestock and Grassland farms but it also includes the many Municipal Authority users of tractors. Whereas in African and Indian village farming, and elsewhere where municipal duties are motorway mowing, ditch-cleaning and hedge-cutting, this kind of work often requires work teams to travel on and in the tractor. Conventional tractors usually have one seat and an occasional side seat. TIL’s work in 15 counties, with about 400 customers, has shown that work teams of 6 plus the driver are quite common and therefore that is why the Trantor has seats 6 and the driver’s seat.

TIL’s Research and Development directs itself to changing the design of farm tractors, where 32 million are used per day. The big countries, with vast land masses and those that have growing populations, e.g. India, Turkey, Australia, Mexico, South Africa, USA, Brazil and the ASEAN region are some of the countries and continents that are now addressing these soil-health issues.

Graham was an aerospace apprentice that became the visiting Professor of Manufacturing Strategy at the INSEAD Business School after working as a lecturer at Manchester Business School, UMIST and Leeds University. He completed an engineering apprenticeship at RAE Farnborough, followed by National Service in Germany, where he was commissioned and gained his first “managerial experience”.