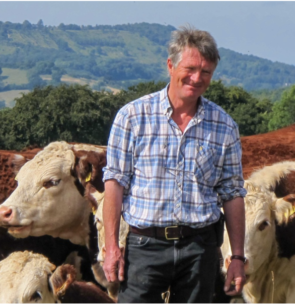 Ian Boyd is a Cotswold Hill Farmer passionate about the Farmland Wildlife.

As a former arable farmer, he soon came to realise that to see the wildlife, there has to be a thriving insect population which is in turn dependent on having healthy soils which was a problem with conventional arable. So began a journey to improve his soils with Organic herbal leys, mob-grazed with a suckler herd of Herefords. Whereas he used to measure the soils P&K indexes, he now looks for soil structure and biological activity.