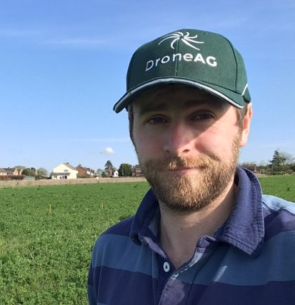 Jack grew up on his family’s 6000 acre farm in North Northumberland. Whilst working on the farm he developed an interest in aerial camera technology and built a successful aerial cinematography and photography business, (before camera drones were even invented!) Seeing a gap in the market, he and his brother Hugh, who manages the family farm, decided to bring those two aspects together, forming Drone Ag in 2015 – serving as a training, hardware and software centre for the use of drones in an agricultural setting; crop mapping and precision drone spraying being the two key uses at the time.

As complex drone software was too time consuming and expensive, he and Hugh conceptualised “Skippy Scout”, an app that would scout crops for farmers and agronomists, autonomously flying a drone to act as a supplement for crop walking, providing leaf-level analysis and actionable crop data far quicker than  traditional methods or other drone-based systems.