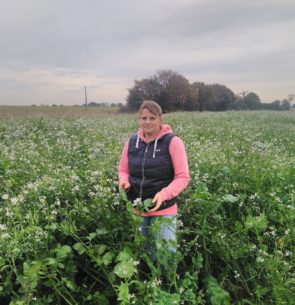 Graduated from Harper Adams with a BSc in Agriculture and Crop Production. Jo went to work as an agronomist for ProCam then Agrovista, advised in the field for over 10 years before giving it all up to farm in her own right. Jo ran her family’s arable farm and contracting business alongside her agronomy for many years until the opportunity for Jo and her partner Rob came along to set up on their own in 2014. Jo and Rob set up ‘Kaiapoi’ a mixed sheep and arable farm in North Hertfordshire, they now have a 2500 New Zealand Romney stud flock, 800ac of permanent pasture and 1600ac of arable cropping – land which the sheep occupy in the winter. Jo completed a Nuffield Farming Scholarship in 2010 and presented a paper titled ‘Soil and Crop Nutrition’. Jo has transformed her tenanted farms into truly sustainable and regenerative farming models. In 2016 Jo and Rob were runners up in Farmers Weekly Sheep farmer of the Year. In 2018 Jo completed the Worshipful Company of Farmer Advanced Business Management Course. In 2022 Jo will open a sheep dairy. Jo and Rob have three children, Maggie, Evie and George.