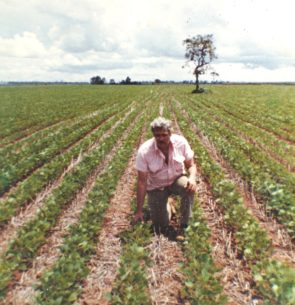 John N. Landers, a British agronomist, arrived in Brazil in 1966, as an irrigation research specialist with IRI Research Institute. He was the chief agronomist on IRI’s Jari Irrigated Rice Project in Pará state (1967), setting up up an agricultural research project in the Orinoco Delta of Venezuela. He returned to Brazil in 1972 and developed an IRI tropical forage seed project (which was later  sold to International Plant Breeders of UK) and  there he continued to develop quality forage-seed technology. He introduced Zero Tillage with the first tropical soybean variety worldwide and ran a development project for three years, financed by Manah S.A.(a progressive fertilizer company).  In 1992 he founded the Farmers’ Zero Tillage Association for the Cerrado (APDC), which played a leading role in promoting Zero Tillage Conservation Agriculture in the Brazilian tropics; the Zero-till/CA area in the Cerrado rose from zero in 1980 to some 15 million hectares in 2018 and was pivotal in making Brazil a leader in sustainability of tropical agriculture. He has received many Brazilian and international awards for his services, culminating in an OBE for services to sustainable farming in Brazil and a Doctorate Honoris Causa from the Federal University of Goiás, but the accolade he most treasures is being dubbed by farmers as “The Father of Zero Tillage in the Cerrado” He is now an honorary director of the Brazilian Federation for Zero Tillage into Crop Residues (now amalgamated with APDC) and continues to promote Zero Tillage and compatible technical advances, such as biological controls, controlled traffic farming, rock meal fertilizer and benchmarking. He has authored over 60 professional publications on ZT/CA. At 68 he married for the first time and now, at 81, has a grandson!