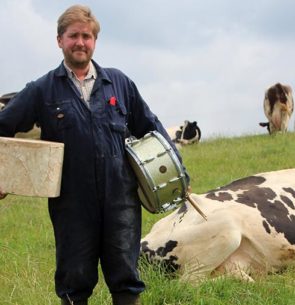 Nicholas Millard is the Herd Manager at Milton Farm, one of two farms at Westcombe Dairy in Somerset. Nicholas has been obsessed with agriculture since he was a child (even though his parents didn’t farm) and studied International Agriculture at the University of Greenwich, where he developed a special interest in how cow nutrition affects the sensory properties of cheese.

At Westcombe Dairy, an award-winning business making traditional cloth-bound Cheddar, Nicholas is promoting regenerative principles, having spent a number of years farming with Patrick and Becky Holden at Hafod Cheese in Ceredigion. For several decades the Westcombe farming operations have been managed according to conventional practices, featuring a high-yielding herd of Holsteins.

In the last few years however, major changes have been undertaken in order to improve milk quality for cheesemaking, promote biodiversity, and to build resilience into the system. Maize growing has been scrapped and replaced with barley, peas, and vetch whole-crop silage, while grass silage leys are now red clover-based. Dairy replacements are all bred to Dairy Shorthorn, and an extensive paddock grazing system based around herbal leys will get its debut at Milton Farm this year.