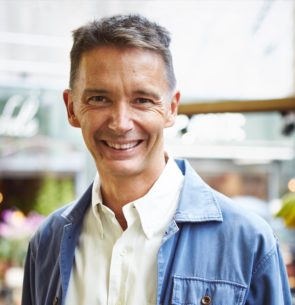 Nick Barnard co-founded Rude Health in London in 2005 with his wife Camilla. Rude Health is renowned for its innovative, delicious and nourishing foods and drinks, winning scores of awards for taste and ethical standards including many Soil Association Organic Food awards and numerous Great Taste awards. Nick is the inspiration behind the Rude Health rants, and is well-known for his infectious enthusiasm for traditional food and drinks. In 2013 and again in 2019, Nick was crowned World Speciality Porridge Champion, and continues his quest for the Golden Spurtle.

Writer of more than 16 non-fiction titles, in 2016 Nick released his first food and cook book, Eat Right, an inspirational upbeat celebration of positive eating. Nick’s book offers achievable and simple ideas, recipes and advice on how to be nourished by traditional foods in a modern world. Eat Right has won acclaim from food writers and chefs across the UK and was a nominee for a 2018 James Beard Award, the Oscars of the food world.