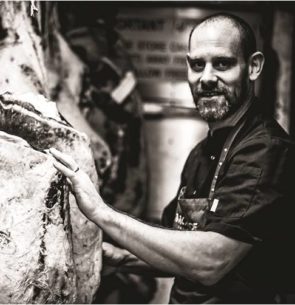 As Butchery Manager at Macknade, Simon has varied experiences within the food sector, including as a chef in some of the country’s leading restaurants.

Before being involved in the food scene Simon was heavily involved in competitive freestyle skiing, achieving a high ranking in the UK scene and becoming part of the England freestyle mogul ski team.

He entered the in 2014 taking on a role at a venison farm. He moved to Macknade in 2017 and now has the leading role within the butchery, constantly striving to achieve 100% providence and a greater understanding of animal welfare, linking this in to the quality of the product and communicating to the end consumer.