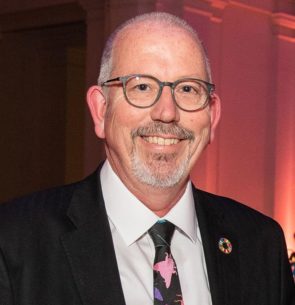 Professor Tim Benton is Research Director in Emerging Risks, and Director of the Energy, Environment and Resources Programme at the Royal Institute of International Affairs, Chatham House.  He is also Professor at the University of Leeds, where he was formerly, Dean of Strategic Research Initiatives.  From 2011-2016  he was the “Champion” of the UK’s Global Food Security programme which is a multi-agency partnership of the UK’s public bodies (government departments, devolved governments and research councils) with an interest in the challenges inherent in delivering food security around the world.  He was an IPCC author on the Special Report on Food, Land and Climate, and a former Agenda Steward of the World Economic Forum.  He has published over 150 academic papers, many on the topics of agriculture and its sustainability.  His particular interest is currently on food system resilience in the face of climate change. His work on sustainability has recently been recognised by the award of an honorary doctorate from Belgium’s oldest university, Université catholique de Louvain.