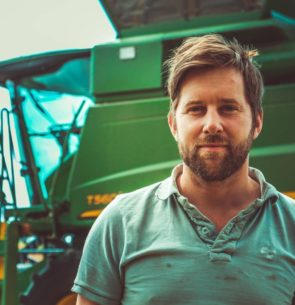 Having spent 10 years working in the film industry, Tom returned home to the family farm, a predominantly arable holding in Cambridgeshire, focusing on cereals and oilseeds, as well as fattening sheep on grass. He has continued in the footsteps of his forbears carefully stewarding the environment and moving toward a ‘no till lite’ version of conservation farming.

Tom is passionate about sharing what happens ‘behind the farm gate’, which has led him to become involved in the CLA, NFU, LEAF, and East of England Agricultural Society, as well as writing monthly in local publications and hosting a well-supported presence on Facebook, Twitter, and Instagram as ‘Farmer Tom’.

In 2017 he launched ‘Farmer Time’ (formerly called ‘FaceTime a Farmer’) which pairs farmers with school classes; currently over 10,000 school children video call to their paired farmer every fortnight to link curriculum learning with life on the farm.

Tom is a confident speaker, addressing groups such as the Young Farmers, livestock societies, and community groups. He is Chairman of the East of England Farming Conference, and the Peterborough NFU branch, and recently appeared on television as one of the farmers featured on “Born Mucky” on the Discovery Network giving viewers an insight in to the highlights and hardships of life on the farm.

Outside farming Tom has a range of passions including counselling, church, a recently established orchard, and exploring the British Isles with his wife, Lisa

…So How Do We Tell Them?

We’re all in agreement that Regenerative Farming is the future, but how do we share that with the British Public, the consumers, and ultimately our compatriot paymasters? How do we communicate our good works, and what’s the best way for each of us? This session presents ideas for introverts, extroverts, and ambiverts, for those with […]

Learn From My Mistakes

We all make mistakes…but the best ones to learn from are someone else’s! In moving to a no-till, regenerative farming system on heavy Cambridgeshire clays Tom Martin has had a steep learning curve. Tom will outline the challenges and pitfalls he encountered, and draw out learning points that we can all apply on our farms.