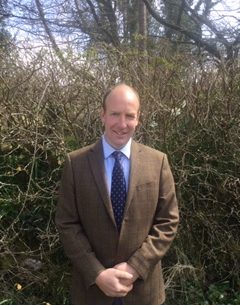 Tom is a Chartered Surveyor, responsible for the day to day management of the Duchy’s  Estate’s in Devon. These comprise 67,500 acres of upland on Dartmoor together with 3,000 acres of lowland near Exeter and 4,500 acres of fundus and foreshore in South Devon. Prior to moving to Dartmoor in 2008, Tom has worked previously for the Duchy on the Isles of Scilly, in Cornwall and Herefordshire.

Tom is involved in a wide range of conservation and land management initiatives and has been actively involved in the development of the Duchy’s work on natural capital.

When not working for the Duchy, Tom and his wife operate a hill farm on Dartmoor with Ruby Red Devon cattle, Whiteface Dartmoor sheep and pedigree Dartmoor ponies. Diversifications include a riding centre, holiday cottage and meat box enterprise.