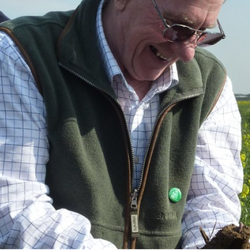 Tony farms in South Lincolnshire and Rutland. He started experimenting with C. A. (no-till) in 1998 in an attempt to prevent diverse pollution damaging the river Eye at Melton Mowbray. The district had been designated an ECSFDI to stop, in particular, soil running off into the river introducing nitrogen causing algal blooms. He tried a variety of husbandry systems, all involving some degree of cultivation, none with much success as far as reducing the soil degradation.

At this time an ADAS lady told him the only way to prevent run off was to put the farms down to grass by the river or to farm without moving the soil, that was the challenge.

Tony started with 100 acres per year for 5 years to gain enough knowledge, so he thought, to convert all 3000 arable acres to C.A. He has continued to refine and develop the system ever since.

For some years Tony has been reporting progress as a Farmers’ Weekly Barometer Farmer and hosting visits to the farm in Lincolnshire on the assumption that it is easier to walk on it and see the system than listen to a description. He hosts parties from all round the world, this year some 300. He is pleased to demonstrate and explain every step he has made, the problems encountered, the change to the soil, the output over time.

There is generally experimentation going on each year by any one of six universities into the change that C.A. makes to the “health of the soil”. Tony makes video presentations of the progress of change on his farms and spends time around Europe every year to compare and consider and learn from the C.A. farmers all over.

Tony joined with Members of the European Conservation Agriculture Federation (ECAF) at the EU Commission in Brussels to present and promote the adoption of C.A. as a recognised form of sustainable agriculture. It is pleasing to note that recognition of C.A. has been received across Europe, including the EU, and even seems to be part of the new UK agricultural scene.

Tony is the senior (oldest) member of three generations working together and on April 1st 2018, Harry arrived to make the fourth generation.