What does fashion have to do with farming? 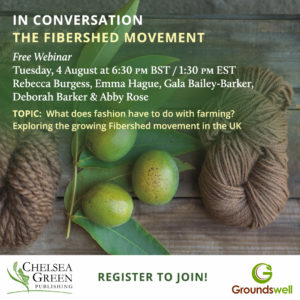 Similar to a local watershed or a foodshed, a Fibershed is focused on the source of the raw material, the transparency with which it is converted into clothing, and the connectivity among all parts, from soil to skin and back to soil.

Fibershed is an international movement developing regional and regenerative fibre systems, where farmers, producers, textile workers, designers, distributors and many others work together to responsibly manage the full lifecycle of a garment.

Join a panel discussion with Fibershed founding director Rebecca Burgess to discuss how the movement started in the USA and has subsequently grown around the world. We’ll hear from those building the Fibershed movement within the UK, including Emma Hague, who is founding director of the Bristol Textile Quarter and started the South West England Fibreshed group. We’ll also hear from shepherd Gala Bailey-Barker of Plaw Hatch Farm and natural dyer Deborah Barker who both founded the South East England Fibreshed group. Abby Rose, of Farmerama Radio, will be leading the conversation, and we’ll have time to delve into questions from the audience at the end!