Composting of organic (waste) materials has already been applied for many years in  agriculture and horticulture. During composting, the material is aerated by regularly turning the windrow. This stimulates the aerobic micro-organisms. These micro-organisms use organic matter as their energy source. This will heat up the windrow and as a result a considerable part of the organic matter will be lost as CO2, which is emitted into the environment. Another option is fermentation of the organic materials. This process takes place without aeration by turning. Following the Agriton method, Ostrea Seashell lime, Edasil Clay minerals and Actiferm (a microbial inoculant containing Effective Micro-organisms) are added to the windrow when the windrow is set up for fermentation. After this the windrow is closed by putting a plastic foil tightly stretched over the windrow. During a period of 6 to 8 weeks the windrow is fermented. This is called Agriton Bokashi; fermented organic matter. The goal of this experiment was to compare this Bokashi process with the traditional way of composting. As expected, this anaerobic conversion (fermentation) of the organic material resulted in considerably lower organic matter losses and an enormous reduction in CO2 emission (lower CO2-footprint) to the environment.

In agriculture and horticulture, enormous amounts of organic materials are being produced which are not consumed and can be regarded as waste products. Traditionally, these materials were composted and used as organic matter supply.

During the composting process, a large part of the energy is lost as heat and CO2. As a consequence, the carbon/nitrogen ratio (C/N) is substantial reduced. The C/N ratio of the compost is too low for optimal plant growth. The C/N level of the compost is not optimal to stimulate the life in the soil. support plant growth, Compost is hard to digest for the life in the soil as it lacks nitrogen and easy degradable carbohydrates.  These carbohydrate has gone lost as CO2. With the world population growing rapidly, we need all the organic matter to grow foods and feeds and we have to take care of our environment. Instead of traditional composting, another method to treat these waste materials is available: Bokashi, which is the Japanese word for “well fermented organic matter”. 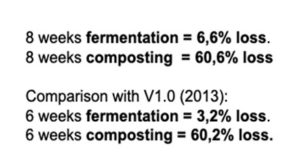 The system keeps the materials stored airtight. During this process complex structures are broken down by the micro-organisms. Due to a lack of oxygen, however, organic material is not completely broken down to CO2, water and heat. Compared to traditional composting it should be possible to considerably reduce energy losses and CO2 emission when making Bokashi instead of compost.

A seven year research programme was set up by Agriton and concluded that energy and nitrogen are a lot better kept with Bokashi than with composting which showed an average loss  of 50 % of the available carbon.

The carbon/nitrogen level of organic material in the soil of around 20 is optimal for plant growth.

In the Bokashi material the C/N ratio was 19.5 in 2013 and 22.3 in the 2015 material. For the traditional compost this ratio was 10.1 (2013) and 11.4 (2015), which is too low for optimal activity of soil life. Energy losses from the product as well as an enormous reduction in the production of the greenhouse gasses, CO2, methane (CH4) and NO2, favour the production of Bokashi instead of traditional Compost.

What to find out more? See Jan Feersma Hoekstra speaking at 1400 on Day 1 in the Soil Tent and see the Bokashi heap in the Pasture Field.